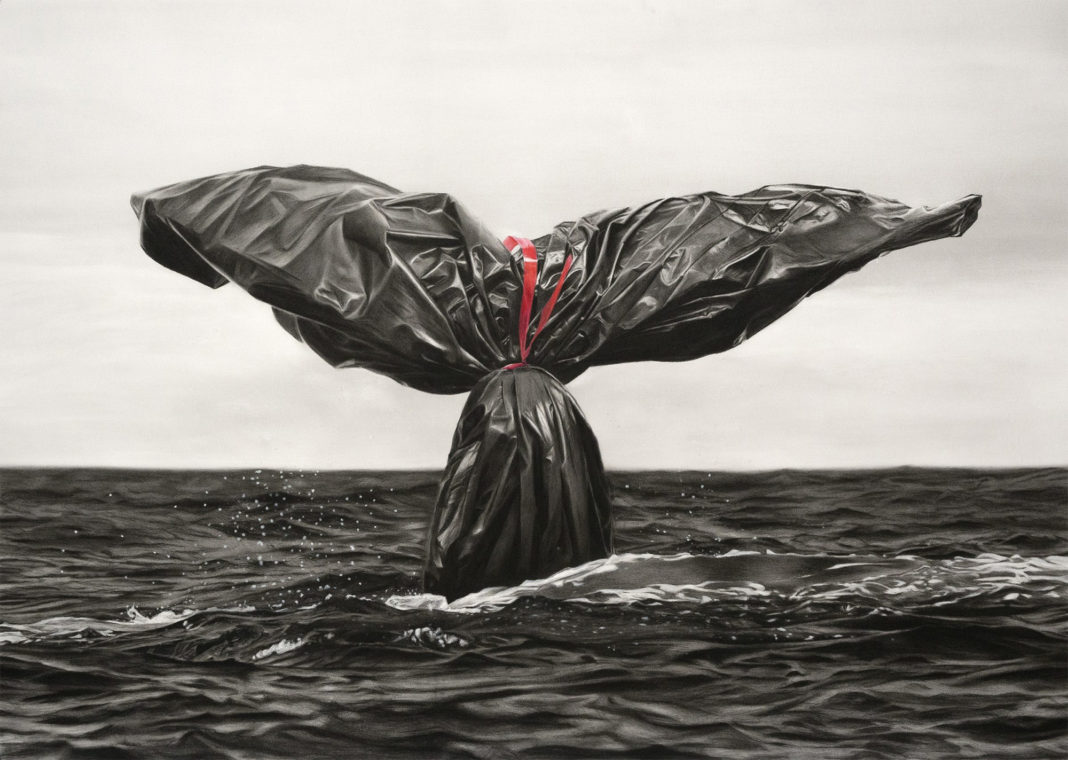 Artistic duo Murmure, best known for paste-up and studio work, have returned to the streets where it all began, creating some incredibly bold, meaningful and thought-provoking pieces for their latest project, titled ‘Garb-age’.

The artistic duo, made up of Paul Ressencourt and Simon Roche, met at fine arts school in 2006 and have been working together since then. They have combined their skills, taught each other, and explored various techniques, melding an assortment of forms, such as graphic design and naturalist etchings, eventually leading to their present, signature style. Forming a successful partnership and winning various contents whilst at art school, it only felt natural to continue working together. “That is when we really started to create four hand drawings for the streets,” Paul goes on to say. “That is how Murmure started.”

Murmure’s work combines hyper-realism with surrealism to create some truly striking imagery. “We really wanted to have a realistic render to catch the eye of the spectator, and to play with the urban environment; the chosen wall, the time, weather and human degradation of the work.” To this end, Murmure use a multitude of blended techniques, from pencil and chalk work in the studios, to paste up, stencilling and spray paint on the streets. A successful period of studio work allowed them to realise the importance of the studio in terms of their street art as well. They have now moved towards using the studio as a set-up point for the various challenges that street art presents. “Our way of creating artwork for the streets has changed. We now start by first creating a rough version of the planned work on a smaller scale, or a sketch, and then we decide if it is worth developing the idea further, either for an indoors version, or for the streets. We also think about how to make it happen so that it is meaningful. That is how we actually transitioned from the street, to the studio then to the street again.”

This new approach to their craft has resulted in numerous exhibitions in recent years, before the move back to the streets. Murmure now have murals and paste ups throughout Europe, including Russia, Norway, the Netherlands, and France where they are based. 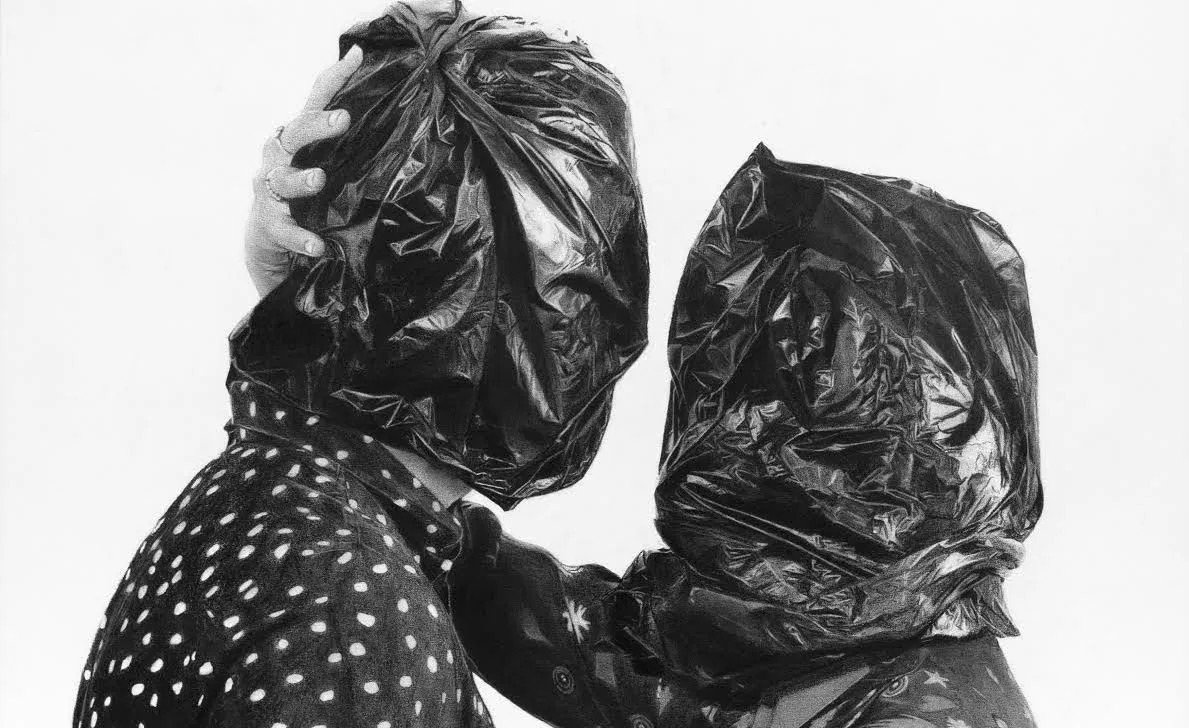 Their most recent project is ‘Garb-age’, in which they create images using drawn and painted plastic bin bags. Standouts include Garbage Whale, a huge mural of the largest mammal on our planet and therefore a powerful symbol of nature itself, something epic and beautiful that is now at humanity’s mercy.

The Kiss is another, in which a couple stand face to face in embrace, but their faces are covered in bin bags. The duo state that their art is open to interpretation, but it clearly has a poetic quality to it, and this latest project in particular is a not so subtle outcry against environmental issues such as climate change, the wastefulness of our society and the destruction of nature and feeling. In whichever way one chooses to interpret the specifics, the overall message seems to be clear. The beauty of nature, and thus the beauty of what humanity once was, is getting lost. Our planet is on the verge of collapse. And we need to do something about it.

predominantly monochrome images, with just a tiny element of colour, the emotional impact of their work is further heightened. The duo themselves state that they always start with a message, and then try to create a style and project that can best convey said message. To them, the message is more important than the art and graphics they lead to, and perhaps it is this focus on ‘saying something’ that allows for their work to be so resounding and hopefully influential. Historically, street art has always been a medium for spreading important political and social messages, so all things considered, it certainly seems like the perfect platform for Paul and Simon to continue their work.

“We try to think of the message first, and then put our techniques to use in order to spread it.”

Murmure certainly have our

attention. Let’s hope they continue to strike deep into the hearts of those who witness their art, and perhaps help to change some attitudes as well. Maybe then, we as a society can rip away the trash bags and recapture some of that lost beauty of nature and ourselves, that lies hidden somewhere underneath our careless and destructive present existence.

We asked Murmure some further questions about the inspiration behind their work, their views on street art in general, and what is to come from the pair in the future:

Outside of the medium of street art who or what inspires you visually and why?

Paul: For the last 12 years I’ve been working as the artistic director for a communications agency in graphic design, which has allowed me to develop my taste in composition and helped me understand the necessity of bringing something meaningful to the creative process.

Simon: I started drawing because I was really passionate about the graphics of the Belgian comics and illustrations that I grew up with. So for me, illustration in general was a big influence when I started. Naturalist etchings were another, all those images and pictures of nature. I was raised on Jacques Cousteau notes so I have a big love for nature.

Do you think street art is becoming more prevalent in highlighting social, political and environmental issues?

Paul & Simon: In contemporary art those have always been common subjects. Street art has always existed with a focus on social and political elements. We are also trying to share messages about social, political and at the moment environmental issues. We try to think of the message we want to share first, and then put our techniques to use in order to spread it. The piece has to be meaningful, and that’s why we work on themes. That’s also why we like to experiment with new techniques all the time, so that we can use various styles in our work. 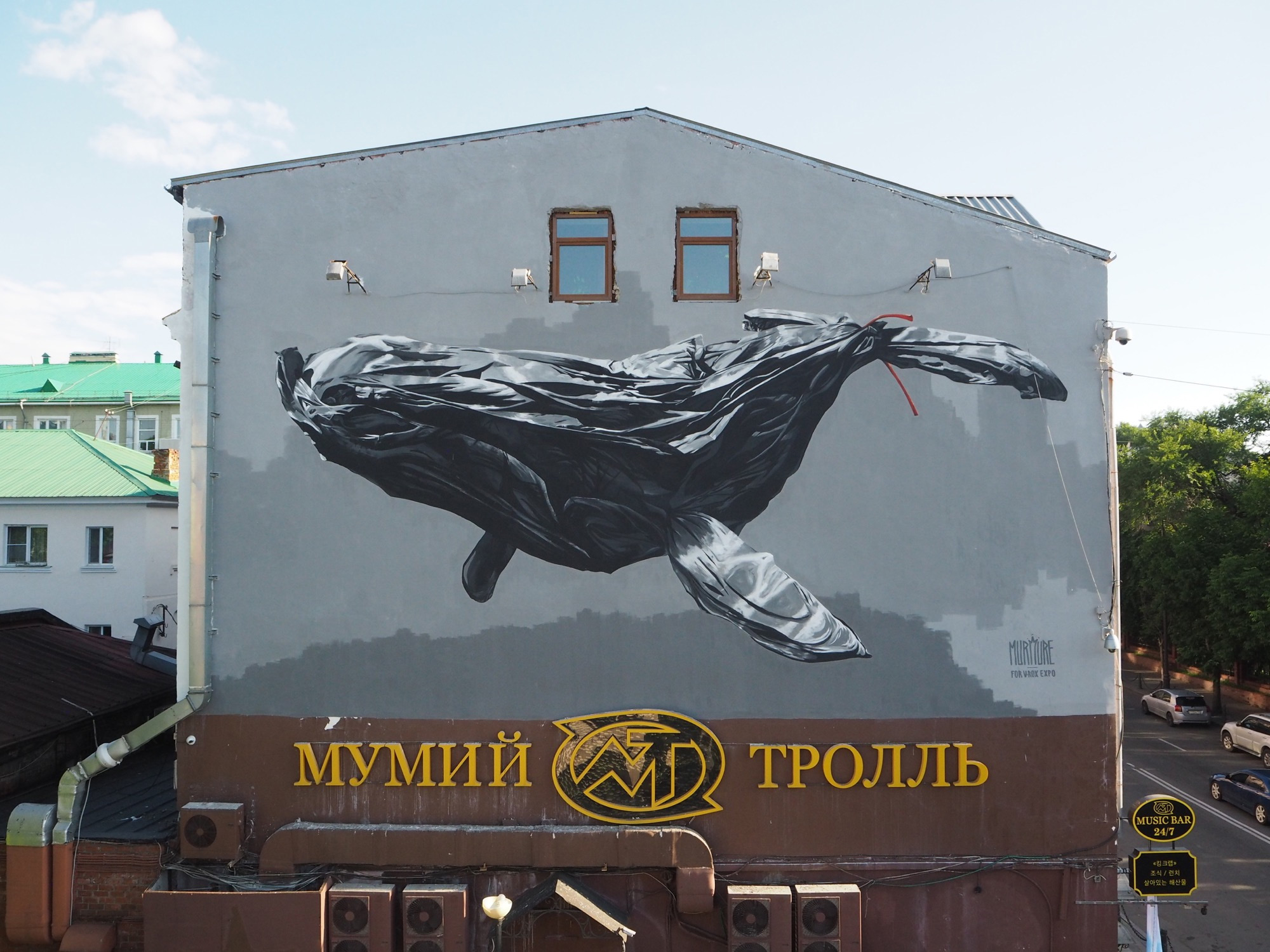 What are your goals and aspirations for the future?

Our goal right now is to pursue the ‘Garb-age’ theme and continue to develop it to its full potential. There are still many things to be said. In the meantime, we are also starting to work on new ideas. We have a project in mind that we are keeping to ourselves for now. It’s more conceptual, but still based on the environmental issues that we feel need to be addressed. Hopefully this project will come to life in a near future.

Do you have plans to bring your art to the streets of the UK anytime soon?

We went to London last year and did some paste up there. We also had one of our artwork showcased in StolenSpace gallery for a group show, and we are currently working on an edition with Graffiti Prints. We would love to do a mural in the UK but are still waiting for the right opportunity. We love the UK and are always willing to go there and spread our messages in the streets, but right now we don’t know when we will get the chance to go back.