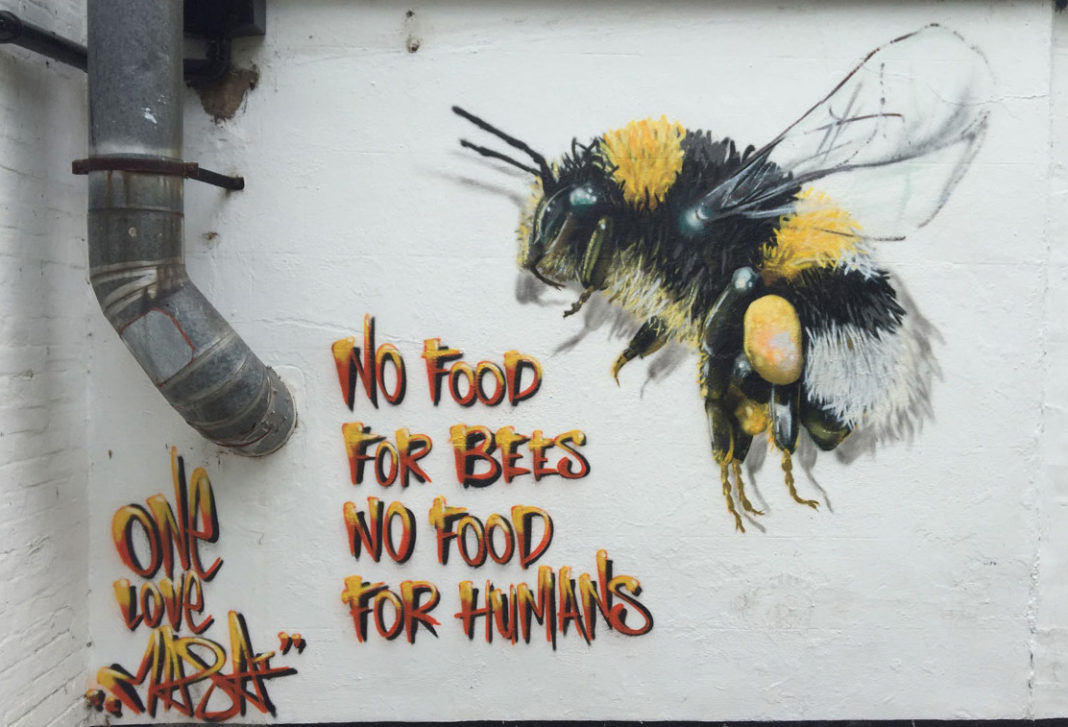 “It’s impossible to research extinction and not understand the word ‘biodiversity’. Once you understand that word you know that we are all a part of this planet.”

‘Art, music and podcasts won’t change the world, but they could help encourage people to see the widest picture.’

London-based artist Louis Masai is best known for his paintings and murals, which gave him his foundations in the contemporary art world, but in recent years he has moved towards installations and 3D sculpture work. In spite of his vast and impressive murals that can be seen all over the world, he does not consider himself a street artist. His background is in fine art, and he spends more time in the studio than in public spheres. Like all true artists, regardless of how he works, he maintains a distinct visual style. He works in bright colour, creating patchwork animals of all species, from the sloth to the elephant. But most crucially, regardless of his chosen medium, the core of his work is his message: one of environmental reflection.

Masai aims to engage audiences with his artwork, to ask questions with his ‘visual language’, highlighting endangered species, species equality and environmental factors such as climate change. His recent installation series focuses on the farming industry. Many of these ideas connect to the terrifying issue at the heart of it all, that of the 6th mass extinction and the collapse of biodiversity, an issue that we should all shift towards the forefront of our minds .

Masai himself states that the ecological issues facing mankind are perhaps the greatest yet, and that it is our duty to address them. To this end, in 2017 he spread his reach even further, by starting the All Fruits Ripe Podcast with Adam Hylu of Unit 137, in which they speak to experts on

environmental and ecological issues, and present the cold hard truth to their listeners. It is clear why Masai has been called an environmental activist at times, although he personally feels uncomfortable with this label. He still considers himself an artist first and foremost, but with all that’s going on, we have seen these elements possess the power to become one and the same.

We can ignore facts and figures, but maybe a giant technicoloured mural of sea turtle and coral reef on the side of a building will grab our attention.

Masai maintains that art has the power to encourage people to see a wider picture,

What inspired you to start using your art as a catalyst for raising awareness of issues such as climate change and endangered species?

My other passion besides art is nature, plants and animals. I have always been fascinated by the wonders of nature, its colours, shapes, and sassiness. So it was kind of an obvious direction for my art. After a number of years just painting without intention or story, I tuned towards this idea that painting could be a voice for the voiceless. I wondered why species that were endangered when I was 5, were even more endangered today than ever before. It upset me, and I wondered if anyone else was bothered by it. Once that first painting went up with a sense of purpose, a call to action so to speak, it sparked a new chapter in my career, but also my very existence as a being.

It’s impossible to research extinction and not understand the word ‘biodiversity’. Once you understand that word you know that we are all a part of this planet. In my case, in order to release the burden of guilt, it makes sense to get involved in a better functioning biodiversity. It goes full circle for me. I’m wowed by nature. Researching and painting these species has made me more conscious as a consumer, and more conscious of the fact that I am a cog in the ‘biodiversity’ machine. Every day is a learning curve. I don’t ever intend to pretend I’m perfect, but I am always improving.

A lot of your artwork focuses on animals. Why particularly this subject matter?

Currently it’s animals due to the fact that animals have always been my most direct point of interest, but I’m starting to paint more plants too, and that will only increase. Right now, the audience is still tuned into

the animals and it’s tough to find the time or opportunity to redirect the subject matter of my work, but it’s happening slowly.

Do you find it hard to get across the intended message through your artwork? Talk us through the process of creating the concepts. At the end of the day my work is art. It doesn’t have to be anything more than that. If people can see something more in my work, and find the deeper meaning in what I am doing, then that’s amazing. Let’s not forget that we are still a ‘majority society’ that sees a pig as a sausage and not an animal, deserving of the right to life.

My point is that people will always see what they want to see. It’s hard enough getting a painting right, so to then get a politically charged environmental message across as well, in a way that resonates with people, creates another level of complications.

That said, I think that I’m widely known for my subject matter and the story that comes with it, so when people see my work they will often accept that there is an added value and meaning to it. This is of course clarified in my social media posts on instagram, in interviews, and on my podcast.

Sometimes I will also write messages on the walls with the paintings, and then inside the patchwork of the paintings themselves, there are 100s of mini paintings. These tell stories of their own. For example, there are chain saws painted within the patchwork of the sloth. I also painted the mural at ZSL (London Zoo) to highlight that their habitat is being removed by the logging industry. Sometimes I also work with NGO’S or charitable environmental businesses, and they further support the art with media based PR and comms.

What’s the meaning behind the patchwork signature style of your murals?

Patchwork is amazing. It’s resourceful, colourful, functional and global, but it’s also something from a bygone time. Modern human society is consumerist and very wasteful. For me, the juxtaposition of patchwork, a forgotten human process, and the endangered species, is really fascinating.

As I mentioned before, the patches also give me the opportunity to tell a hundred stories within the story, and this is a viable approach

to getting a more rounded story across. From a personal perspective, the patches allow me the opportunity to engage in all my personal artistic interests, such as comics, cartoons, fabric patterns, flora, colour and geometry.

What do you hope to achieve from your work?

Every project has a different objective, but ultimately, I’d like for humans to be more compassionate, to be more reflective and accepting of all species.Wouldn’t itbewonderful if biodiversity was allowed to function efficiently again?

In our previous issue we discussed the rise of eco/climate anxiety. What advice would you give to our readers who are looking to live a more eco conscious lifestyle?

This is tough. I think right now people have anxieties about everything, every colour of the rainbow. Climate anxiety is just a new addition and it’s due to media attention. Whatever the media hypes up, infiltrates anxiety. I’d say we are all pretty pandemic and virus anxious right now too.

As for advice on how to deal with anxiety, I think that if you know what’s causing it, you’ve reached a huge milestone. Once you identify the cause of the imbalance, you can start to work on ways of removing the anguish. Regarding climate anxiety specifically, there are so many ways to be kinder to the planet. Buy and consume more consciously. Don’t buy unsustainable products, like sugar, palm, corn, soy, cotton, and almonds. The list goes on. When your shopping, look for the words ‘rainforest alliance’, ‘organic’, ‘round table alliance’ and ‘no GMO’ on the labels of what you buy. These labels mean that the companies who produced them actually give a shit about the biodiversity of the product’s origin.

Set yourself monthly goals. Don’t try to do it all at once. Try removing plastic for a month. Switch your diet up. A plant-based diet will have a huge benefit to you and the planet, and moreover the animal isn’t being murdered. It’s a win, win. To be honest, it’s all about what you spend your money on. Don’t fund a company reducing your chances of existence.

IS ART IMITATING LIFE OR INFLUENCING IT?