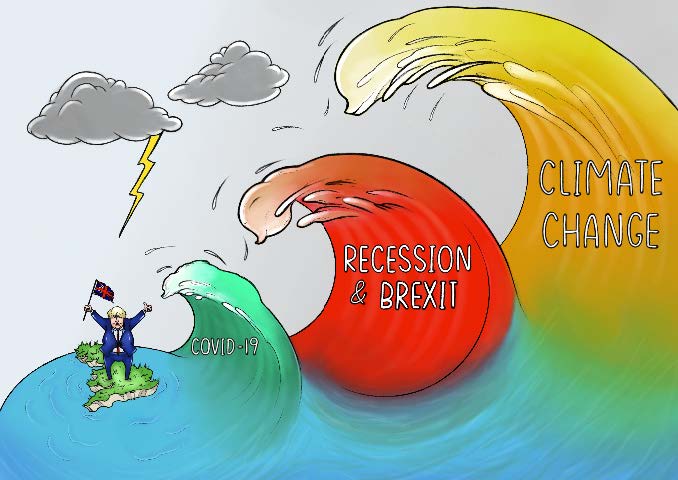 OK, spoiler alert, the majority of this piece ain’t pretty, it’s not dressed up or diluted with bullshit, we at KulaMag believe in you to make the right choices if you’re given the facts. If everyone had been told the consequences of our rabid exploitation of natural resource and habitat at the outset only the clinically insane would have agreed to it. Pandemics, flood, famine, water scarcity, rising sea levels and unsustainable food production practises are a direct result of global economic policies that have left us up shit creek with no paddles and a puncture in the inflatable, but we’re not done, it’s not too late for everyone to put their hands in the water and paddle us towards a new brighter, and more sustainable future.

Small incremental changes to lifestyle reduces impact and cumulatively makes a huge difference, each voice that then encourages others to do the same can become deafening until we can’t be ignored by Governments or their leaders. That’s the goal and it’s an obvious one if we continue to be better informed and make fact-based decisions.

As the world continues to come to terms with the COVID-19 pandemic and the consequences of it, some countries are starting to lift restrictions with varying degrees of success. China is battling to avoid a second wave following easing of lockdown measures, Germany has seen a big jump in transmission rates while parts of Europe is trying to open up to international travellers and the huge tourism boost that will bring, unfortunately many of these decisions seem to be led by economic and financial pressure not public health considerations.

A big fat turd was thrown into those crystal-clear blue waters with the announcement that virus free New Zealand had recorded two new cases, both imported from the UK! No doubt other countries around the world, and particularly, European destinations will be looking at the still high rates of infection and daily deaths in the UK with some trepidation.

Whether this results in extended travel restrictions or not, the current UK Government advice to avoid international travel for all but essential reasons renders flying off to Spain or Italy problematic as travel insurance may be invalid. The big club events and festivals synonymous with summer have been cancelled with some optimistic bars and venues attempting to provide some sort of holiday experience for those venturing out.

The UK Government would have us believe that they have the virus under control as they lift restrictions and encourage us back to work, shop and schools; unfortunately, their COVID record to date doesn’t inspire any confidence, nobody has yet got to grips with the long term effects of this virus so caution is still being advised by scientists and clinicians alike.

What is becoming clearer is there is unlikely to be any return to “normal” anytime soon, if ever, with fundamental changes across the globe in the ways we live, work and interact with each other.

Whatever the “new normal” is unclear until we have clarity from the scientists and medical experts so in the meantime let’s not waste time guessing. Scientific and clinical advice seems to have been dropped by politicians in favour of economic considerations with confusing and contradictory advice given almost daily. Faced with an ever-changing panacea many are ignoring the guidelines, especially if they see the “elite” or others in power doing whatever they please.

We had the chief advisor to the Prime Minister breaking lockdown rules, then being supported by crony politicians, so it’s little wonder that at points individuals have said “fuck it” and broken the lockdown or the distancing rules, particularly when they felt the reason justified the risk. This started with street parties and gatherings commemorating VE Day but really came to the fore after the horrific death of George Floyd in Minneapolis, thousands were moved around the world to demonstrate their support for the Black Lives Matter movement and protest against systemic racism.

Hopefully each one of these protestors weighed up the risks against the reward of breaking social distancing rules for such a worthy cause but would they have taken to the streets in the numbers seen in the UK if they had been in receipt of the facts about COVID-19 and its disproportionate effect on the BAME communities. A leaked Public Health England report which was initially suppressed by Government stated, “stakeholders pointed to racism and discrimination experienced by BAME key workers as a root cause affecting health, and exposure risk and the disease progression risk”. It went on to report that BAME communities were disproportionately at risk of serious illness and death from exposure to COVID-19 than other groups.

With the fallout from the USA around racism and discrimination breaking around the world, it’s clear that the metrics of a report citing systemic and institutional racism in the UK would not look good so politicians did what they always do, they buried it for as long as possible. The question is: would the publication of this report have altered the behaviours of the guys who marched one way or the other? On the one hand the report highlighted the dangers to BAME communities of everyone not adhering to COVID rules such as social distancing, on the other it clearly showed that systemic racism isn’t confined to US law enforcement, it is embedded in British society and institutions. We’ll never know if either of these factors would have made a difference to numbers or the anger felt by demonstrators but what it does show is factual information is key to individuals making reasoned decisions.

Facts really do matter and when clear information is being suppressed or diluted it becomes impossible to make reasoned individual judgements when people’s lives literally depend on it.

The pandemic has been a wakeup call to everyone, half a million people globally have died as a direct result of the virus and that number is still rising, we as and collectively will need to adapt our behaviours and interactions with each other for the foreseeable future but there has been some pluses to the pandemic. A focus on family, local community and increase in empathy but also in the environment with improved air and water quality and increase in wildlife coupled with a slower pace to life, more time to think and increase in contentment.

In addition to nearly 60,000 excess deaths during the pandemic (ONS figures June 16 2020) , the UK has experienced 600,000 people being made unemployed with this number set to increase to over 3 million as furlough and business support ends in the autumn. This will hit hospitality particularly hard with huge uncertainty still remaining over safe conditions to operate social distancing within and the impact of reduced capacity and demand. Festivals, gigs, events and spectator sports will continue to have huge challenges ahead, with young people particularly disenfranchised by missing out.

Faced with these financial and social pressures here will a temptation to try to return to a familiar normality, whether that’s packed into Glastonbury, Ocean Beach, Wimbledon or Anfield, people will crave camaraderie, atmosphere and sheer pleasure of these events but until there’s an effective vaccine the chances of any of these in any recognisable format remain very slim. Already we’ve seen a number of illegal raves springing up and frustration with the situation will only grow, the clamour from populist politicians to open up along with low risk groups such as the young will become deafening.

So let’s look at the probable outcome; as the summer fades, infection rates will rise, local lockdown measures will be implemented in individual schools or hospitals or businesses, high risk groups such as the old, infirm, those with pre-existing conditions and some BAME will be asked to self-isolate and before we know it we have a segregated society. Populist leaders will seize on this producing policy which plays well with the mobile majority, thus ensuring their survival in power with their traditional voter base in older, more conservative support left behind. This isn’t some sci-fi dystopian future, it’s actually been underway since the beginning of the pandemic, packaged as “shielding”. Now more is known about the groups at most risk it could only be a matter of time before a huge section of society could be segregated to allow the rest to thrive.

At times of economic hardship in the past one of the first casualties has been the environment and this will be no different, add in the further economic hit of an increasingly pointless Brexit and the U.K economy is set to see the worst contraction in Europe, the UK Government are already looking to dilute environmental legislation, relax food and labelling controls along with animal welfare. During these unprecedented times it is vital that we have access to facts and make decisions based on these facts, not populist policies.

COVID-19 has had a devastating effect on people around the world but pales into insignificance when weighed against the twin evils of social and racial injustice and climate change which have the potential to kill millions and destroy the habitat we rely on. Here at Kula we will be working to provide clear facts and opinion from experts on local and global issues to enable clear decision making, we will be highlighting the good and the bad and encouraging change to the latter but above all we will be striving to create a community of people who care, care about others, care about the planet and care about the legacy we will be passing on to future generations. Charles Swindoll wrote; “Life is 10% what happens to us and 90% of how we react to it”, however we react to the challenges ahead, let’s make sure the choices are informed ones.

Is the big green boom a little white lie?