Home Features The Sound of Silence 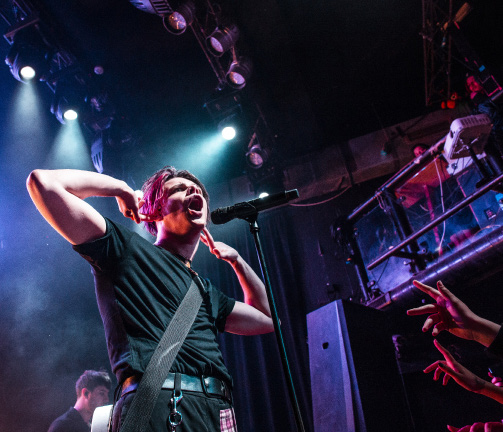 For a city which has always had its finger on the cultural pulse, what does the future of Brighton & Hove look like now the stage is empty?

From the music hall days of Max Miller to the sounds of The Who smashing their kit at The Brighton Centre, or Fatboy Slim tearing dance music a new one on the pebbles for Big Beach Boutique and Kylie Minogue bringing the glitter to Brighton Pride last year, live entertainment runs deep in the city’s veins.

“It’s what makes Brighton such a great city in my mind,” said Paul Musselwhite, Managing Director at Komedia Brighton commenting on why the future of venues offering diverse events is so important.

Currently over 400 Grassroots Music Venues in the UK are at imminent risk of being closed permanently and Brighton & Hove’s live entertainment industry has been dealt another devastating blow. With the cultural scene of the city and thousands of jobs at stake, it could be time to face the music!

However, much like early Coldplay, everything’s not lost. Working with the Music Venue Trust (MVT) charity, as part of a nationwide #saveourvenues campaign, hundreds of Brighton & Hove premises have launched crowdfunding pages to support grassroots venues to counteract the impact of Covid-19 and lockdown.

For Brighton’s most well-known comedy venue, Komedia, whose income streams have been reduced to zero since closing in March, the #SaveOurVenues campaign is helping keep its business afloat as the industry faces an uncertain future. “Every little helps,” explained Komedia’s Paul Musselwhite. “Plus the great thing about the fundraiser is that anything we raise above our target will be fed back into the national campaign to help venues just like us up and down the country.”

Andy Hillion, General Manager at The Brunswick, which has been hosting gigs, music nights and open mics in Hove since 2006, said: “The Covid-19 crisis has hit The Brunswick, and the rest of our industry, very hard. We all need our city’s venues to safely re-open – whether it’s our employees, our loyal customers or the hundreds of performers that grace our stages each month. If you’ve ever enjoyed a live gig or intend to enjoy one in the future, please donate whatever you can to the #SaveOurVenues fund.”

For anyone used to moshing in crowds, dancing til 4am and having their trainers blackened by venue’s floors, the pandemic has literally disrupted the very nature of live entertainment but venues and artists are keeping the scene alive. Komedia has started streaming live comedy

and children’s events via its Youtube channel and music is next. “Will there be a market for virtual paid gigs?” pondered Musselwhite. “We will have to wait and see but we are hopeful in the short term there will be and in the meantime, fans can donate via our crowdfunder or our own website.”

Brighton’s gig and club culture has continually driven trends impacting the wider UK and global culture in a similar way to Berlin, Manchester or even Ibiza. For Yoko’s sake, this is the city which crowned Abba with their Eurovision win in 1974! Whether it’s Big Beat, Electronica, Chap-Hop or Riot Grrrl music scenes or club nights like SlipHam at the Hope & Ruin, which gave Rag’n’Bone Man his debut, or the fresh Gal Pals club night which set new standards for representation – this city is a trailblazer for live entertainment.

To continue pushing trends Brighton & Hove’s venues are supported by some of the hardest working promoters and events organisers in the country, such as Melting Vinyl and Lout Promotions. Despite Covid-19, leading local concert promoter One Inch Badge, which has brought fans the likes of The War on Drugs, Bonobo, Brian Wilson, Haim, Bastille, Wu-tang Clan, and many, many more over the years, is confident it’s not time for a curtain call on live events just yet.

“We’ve been putting on live music for 13 years so to not be able to do what we’re so passionate about is a pretty hard pill to swallow,” admits Chris Lowe – One Inch Badge. “We remain optimistic live music will return sooner rather than later but in this down time we encourage all ticket holders to keep hold of tickets for postponed shows. Support local venues that need help via crowdfunders or continuing to purchase tickets, and also buy records from local record stores online if you cannot visit them. I’m convinced that there will still be a huge appetite for live music when restrictions are lifted & we cannot wait to be a huge part of its return, we’ve already got some pretty amazing show’s lined up for it. Stay Safe!”

As with every venue, promoter, artist, musicians, bar staff, bar managers, sound engineer or cloakroom assistant across the city, the future all depends on No. 10 and whether their ‘impaired’ 2020 vision takes into account UK culture, and not just Barnard Castle. It’s not simply a case of what lockdown looks like and how future guidelines can be adhered to, it’s about how we as a city engage with venues and artists and culture from the struggling independents to the historical halls of old.

As well as the venues and promoters themselves, artists across the city have been hit hard. Local musician and DJ, Abiola Otusanya aka GiwHa, has been making music for over a decade as well as developing other musicians via his Giwa Music label in the city. Since being furloughed, GiwHa has been been busy online promoting his new single ‘Florasia’ and helping local businesses better promote themselves via social media as he sees a move to digital, at least for the time being, as inevitable. “I worry a lot of venues might not come back and my work as a live musician might dry up,” he explained. “At the moment I’m developing other ways to be creative and to still be a musician during lockdown, if it has to go online then so be it. I’m concerned as a lot of what I do is connecting with people when I perform, so I don’t know how it will work without audiences, but I’m not going to stop what I’m doing!”

GiwHa is adapting to the current situation but, like One Inch Badge, he is hopeful for the future of Brighton events. “I’m sure that something fresh and exciting will blossom out of this as we’ve seen happen before in this city. There’s a lot of creative people down here and we’re all in the same boat so I know we won’t let the scene die without a fight. The beat goes on!”

To ensure the music continues to play in Brighton & Hove and across the UK, follow the #saveourvenues hashtag and check out your favourite venue’s social media page to see their own crowdfunding campaigns.

IS ART IMITATING LIFE OR INFLUENCING IT?