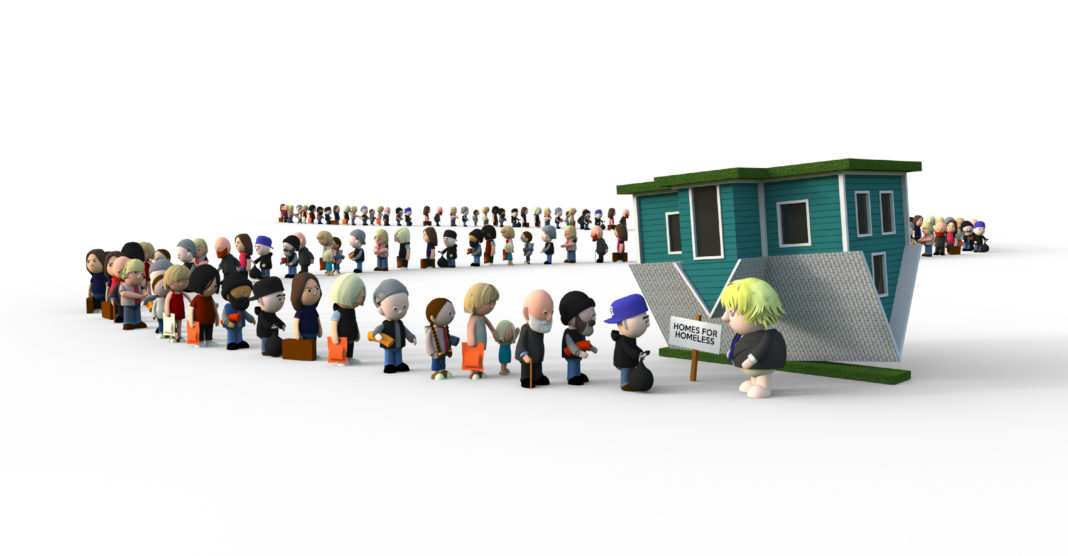 Let’s be honest, how many of us looked at homeless people and empathised with their predicament? How many of us actually took time to understand why these guys were on the street and what could be done structurally and practically to eradicate homelessness and rough sleeping. I’m afraid the answer would be a very small percentage; we normally contented ourselves by chucking some change on a blanket or buying the occasional Big Issue. Some of us went further and raised money through sponsored sleep outs, manned soup kitchens or distributed food parcels but actually eradicating homelessness, no, we left that to others, we left that to politicians who largely faffed around making grand gestures which achieved little. Then everything changed, as the COVID-19 pandemic took hold in the UK in March 2020 and the enormity of the results of widespread contagion became apparent, finally action, the catchy “Get Them In” policy was implemented; not from a sense of civic responsibility or for the welfare of rough sleepers, no, this was entirely self-serving. Scientific evidence pointed to a huge risk of contagion to the public through untraceable and untracked rough sleepers so they were magically whisked away into hostels, hotels and temporary accommodation with Government money made available to local authorities.

Quite understandably there were problems with resource, practicalities and logistics but on the whole the policy worked and took the vast majority off the streets; it was a fantastic opportunity to assess needs, both physical and mental, and to provide a path back to self-determination and self-sufficiency; unfortunately it’s not practicable to do this effectively until the pandemic has passed and support resource is available, fast forward to now.

The COVID-19 pandemic is far from over but as new cases drop and areas of the economy are opening up you would think that now would be the time to address the issues of rough sleeping head-on, to adequately assess individual needs and provide targeted support while you have the vast majority under care and control; think again!

The current Government policy in England is to phase out funding of the initiative by introducing a new scheme with long term housing provided for the homeless; sounds good? Well before we hang out the bunting let’s look at the detail. According the various homeless charities and local authority data up to 15,000 individuals were sleeping rough in the UK prior to the pandemic, of these about 50% remain housed in temporary accommodation with many drifting back onto the streets for a variety of reasons. Local initiatives and schemes are underway in some areas but already the opportunity to make systemic change is being lost. Of course, the problem with homelessness is not confined to rough sleepers with over 300,000 regarded as homeless across the UK in Q1 of 2020; this is likely to explode as COVID support packages for business and individuals are removed and the economy dives into recession. The Governments answer to date is an initiative to build 6,000 new homes with 3,000 promised in the next 12 months. There are other short-term support measures currently being provided such as £6m for homeless charities but ONLY 3,000 homes sometime in 2021 isn’t going to scratch the surface.

After previously experiencing some of the highest rates of homelessness anywhere across the country, Brighton and Hove City Council have been proactive in accommodating those found on the streets in local hotels and B&B’s as part of the “Get them in” policy during lockdown at a cost of £3.9m. They are now being moved into Halls of Residence at Brighton University but this is quite clearly a temporary measure. Speaking to the Brighton Argus earlier this month a BHCC spokesperson commented “We have accommodation in place until September, and are working hard to put in place personal housing plans for all rough sleepers we’re currently accommodating, so no-one will need to return to the streets”.

At every point in recent history, construction has led us out of recession so it makes perfect economic and financial sense to commit to a huge increase in the construction of social housing and commercial conversions now with the asset retained for future generations: a feature of the current Government has been reactive sticking plasters and soundbites, let’s hope they can be persuaded to be more proactive and visionary when it comes to “levelling up” those experiencing homelessness.