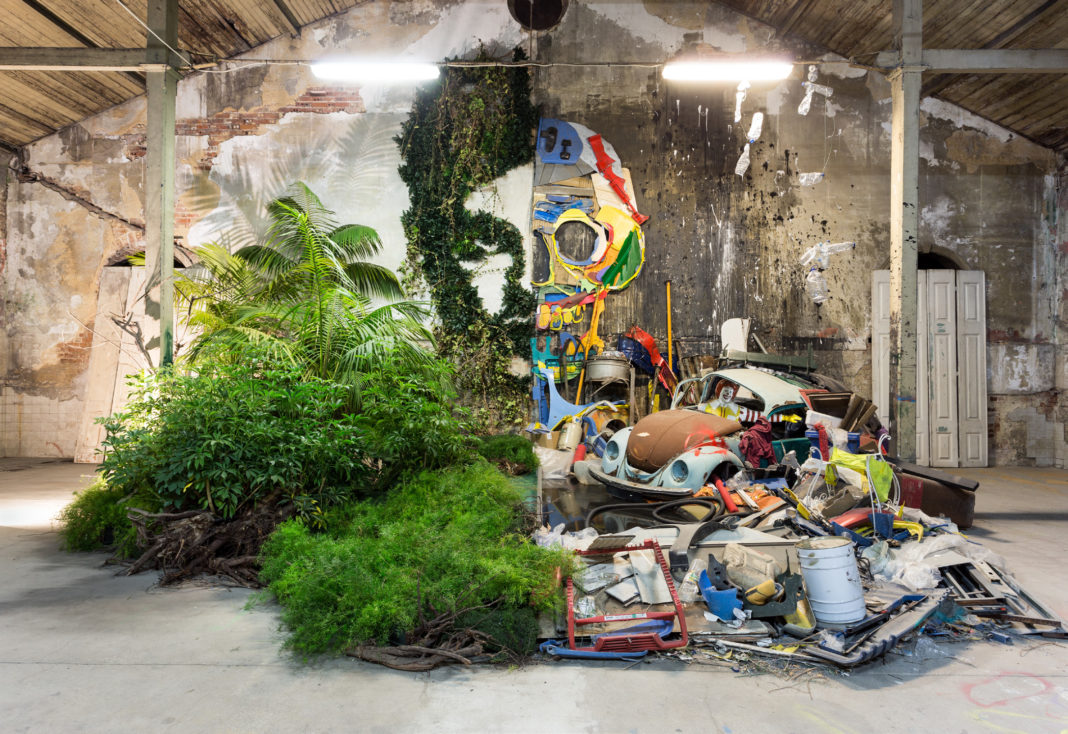 Artur Bordalo, better known as Bordalo II, is a progressive Portuguese street artist and sculptor providing awareness of ecological destruction through his beautifully profound large-scale animal street sculptures made entirely of disposed waste products. As well as Brighton, Bordalo’s work spans across the globe and has become one of the most iconic street art activists of our time.

Inspired by his grandfather Real Bordalo’s artistic legacy, Bordalo’s early interactions with art consisted of oil painting and watercolours, mixed with a fascination for the adventures around illegal graffiti in Lisbon’s underworld. During his time at the Faculty of Fine Arts in Lisbon, Bordalo went on to discover the craft of sculpture and ceramics, but after three years, his focus on street art enabled him to create his most recognisable work to date – Big Trash Animals.

Bordalo’s Big Trash Animals series revolves around the representation of animals on a large scale, built almost exclusively with garbage (as Bordalo says, the same material that kills them), to remind audiences about how pollution affects the natural world. Some of the end-of- life materials found in wastelands, abandoned factories or  just randomly have included damaged bumpers, burnt garbage cans, tyres and household appliances. Since 2012, Bordalo has used around

62 tons of reused materials for his 88 pieces across three continents and 18 countries, including the UK, Germany, Brazil, Norway, United States, Switzerland, Italy and Poland.

The Big Trash Animals series started with the Neutral Subseries, which are characterised by the total camouflage of the objects that compose them and the use of colours closer to the subtleties found in nature. Bordalo then went on to explore reused plastics dispensed

partly in paint in the Half Half Subseries, where animals only have half of their camouflage: one side realistic and the other devoid of ink. In his Plastic Subseries, the sculptures lose their camouflage completely to display only the natural colors of plastics and other discarded objects, used as the raw material. Bordalo’s most recent work took his sculptures to the ocean in The Floating series, where ocean plastic waste was used to create a series of large s marine animals floating in water.

We caught up with the Lisbon based artist to find out more about his inspirational processes behind Big Trash Animals and the important message he wants to leave behind with his work:

Brighton is also blessed to have Bordelo’s iconic work here in the city – a commissioned project for FatBoy Slim’s Big Beach Café. Bordalo took two days to build the beautiful seagull sculpture, made out of Brighton’s trash and plastics collected by the city’s bin men and stored in the DJ’s garage. Only one side is painted, and the other half is exposed so you can see what the sculpture is made of, which now proudly stands as a wonderful tourist attraction to the city.

Fast forward to 2020, and now Bordalo is supporting a campaign entitled “Solidarity is not on lockdown”, launched by Portuguese refugee support platform Humans Before Borders. This campaign aims to raise funds to support 5 grassroots medical NGOs working in the refugee camps of Lesvos in strengthening the response to emerging needs in the face of the current pandemic. As a way of giving his contribution, Bordalo has created a unique and original artwork entitled “Young Black Panther”, from the series of works “Small Trash Animals”, which is being auctioned online by Cabral Moncada Leilões.

Bordelo’s central themes include the excessive production and greedy materialistic consumption of stuff, which results in the continuous production of waste and consequently in the destruction of the Planet. His profound and beautiful creations question the relationship we have with wildlife and his work acts as a form of powerful art activism in an attempt to raise attention to the global problems humanity is facing today.

What inspired the transition from underground graffiti to environmentally led artist?

I was always interested in animals and nature since I was a kid. With that came the environmental concern. Since I remember, I’ve been taught about recycling and the importance of our actions and that one day the earth would heat up and all animals would be affected by ocean level risings and global warming in general. So, once I had the opportunity to raise awareness through my art, I chose the thematics, materials and ways of doing it very carefully, to be able to pass the right intention through my artistic expression.

Where did the idea of using ‘garbage’ as a material to create art with come from?

It was a natural process. I began making experiences with garbage, exploring various themes and compositions. In 2013 I made the first Big Trash Animal!

Where is all the garbage sourced from when you visit each new city? Do you have the type of pieces you want in mind when collecting the garbage or do you just work with whatever is available?

It depends on the project and how production rolls. If we do all of it in the studio, we have deals with entities that source garbage and we can go and pick it up. If the production is in-site, we try to replicate the same process in the various cities. It is interesting to get to know how garbage management works in other places and even more interesting to adapt to the local materials.

From sketch to large scale mural

– talk us through the process of creating these trash animals?

The process is very organic and fluid. I start with a reference image of the animal I want to represent, work it a little bit more sketching over the reference picture and work with my team on cutting plastic shapes to add layers of

shape and colour, freestyling until I am happy with the artwork.

What message do you hope to get across from your work?

The importance of fighting excessive consumerism, materialism and the huge amount of waste that comes from both.

I hope to raise awareness to the urgent environmental issues we are all going through and to the finite natural resources of our planet, that are essential to our and the animals lives.

What advice to you have for our readers who are aspiring to live a more environmentally conscious lifestyle?

As an artist who works in public spaces how have you coped with the lockdown period and have you been working on any new projects?

Lockdown has led me to do a series of ephemeral works. The Provocative series has started years ago and the works included in this series are very direct to the point and heavy in meaning. This subject, of Covid-19, the lockdown, everything around it was a source for ideas and I’ve managed to make some o m a reality during this period.

Why UBI makes PERFECT SENSE, pandemic or not!